The Omega J8004 Juicer Review – the Ferrari of the Juicers!

Start Your Engines For The Omega J8004 Juicer Review

The Omega J8004, produced by Omega, and primarily sold in the US, can genuinely be considered a masterpiece. It is only marginally different from other Omega J models, all of which receive outstanding ratings in reviews and tests.

The stats-all you need to know!

This juicer runs on standard 110V and is commonly referred to as a low-speed juicer. Specifically, it runs at 80rpm (revolutions per minute). This means that it grinds and extracts at a much slower rate than most commercial juicers, which can run up to 15,000 revolutions per minute. This much lower speed ensures that the food being processed is treated as gently as possible.

For most ingredients, the finished juice can be stored within the juicer for up to 72 hours without going bad. Usually, this wouldn’t be possible due to oxidation caused by higher RPMs. The juicer employs a masticating system, which means that it mimics chewing-one of the most natural and gentle on the ingredients. 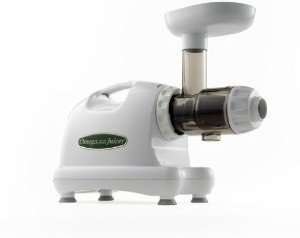 This juicer is quiet while operating, just like its sister models. On that note, the only difference between the Omega J8004 and the Omega J8006 is its color. The ’04 is plain white, whereas the ’06 comes in Chrome. That being said, they are both made of plastic- the difference is entirely cosmetic- although it also affects the price tag- the chrome-colored model is a solid 40 dollars more expensive.

If you want to get technical….

The Omega J8004 weighs an even 15 pounds and measures 15 by 7 by 16 inches. It uses dual-stage, single-gear technology to preserve as many nutrients as possible while processing the ingredients. This juicer model is built to work with fruit and vegetables to mince, grind, and make dairy-based products. A small feeding chute (The space in which the ingredients are inserted) makes it necessary to chop the inserted ingredients into small pieces before filling them for practical use. This can be a slight disadvantage, depending on what the juicer is used for.

What can I do with this?

This juicer is highly praised for its ability to handle vegetables, something many if not most other juicers struggle with or outright fail at. It is also an excellent tool for making frozen desserts, ice cream, and other dairy products. This model, as well as the J8006, can make peanut butter by crushing and grinding nuts. It is relatively easy to clean-despite with many different parts and several other attachments and extensions. Due to this, it can be a little hard to get used to-it most likely isn’t a perfect ‘first’ juicer, especially considering the hefty price tag. 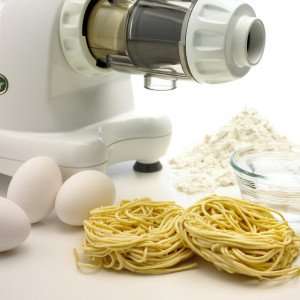 The juicer has been around since 2009 and still retails for about 300 dollars, which can be a fair investment for a handy tool that is a significant addition to every kitchen. For those looking for a somewhat cheaper model-the, the previous J8003 & 8005 are lower-spec, a little lower, and less well-made. However, they still serve well as an ‘entry model.’

For young mothers, this juicer is also an exciting item as it can produce high-quality baby food, preserving as many nutrients as possible while delivering a smooth product perfect for healthy babies.

The Omega J8004 (and its sibling, the J8006), are valuable additions to every kitchen. These juicers are quiet and operate at 80rpm rather than most commercially available models that use between 3,000 and 15,000rpm.

At around 15 pounds and approximately 15 by 6 by 15 inches, it is a reasonably sizeable machine; however, its many uses more than makeup, for it-it works well with vegetables, fruit, dairy, and frozen products; it can even be used to make peanut butter by crushing nuts.

The only downside aside from its somewhat clunky side is the price tag-even seven years after its release, it retails at over 200 dollars (240 for the chrome-colored J8006 model), making it a rather sizeable investment.

There are better models out there for someone who wants to get started with juicing, especially since the model comes with a fair amount of attachments and parts that can be difficult to master for newcomers. It is, however, a very nice investment for mothers as it makes very smooth and pulp-free baby food.

Help others find our content by clicking on the social sharing buttons below.

Thanks you for supporting us.

Read To Try It?

Discover The 7 Different Types of Blenders

5 Best Countertop Blenders For Any Kitchen

The 5 Best Masticating Juicers On The Market

Masticating vs Centrifugal Juicers, which is best for me? 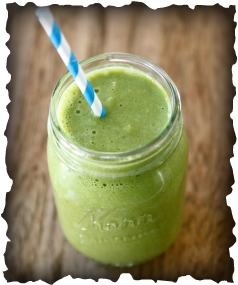 A Juicing Recipe to Turn Back the Clock!

You have Successfully Subscribed!